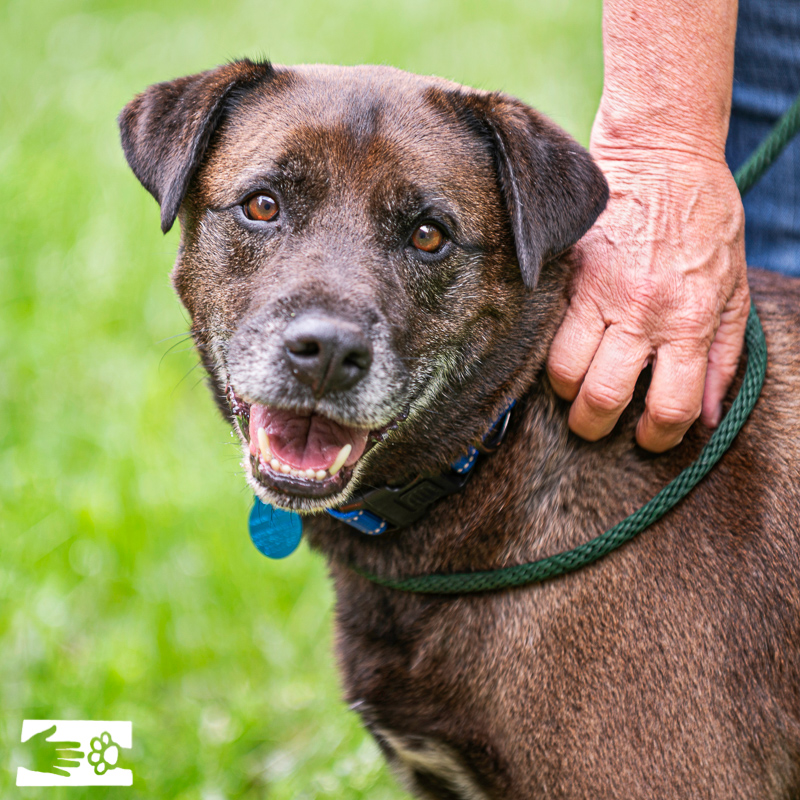 He’s a sweet, sensitive pup looking for a new family to love. Seven is a pretty low-key kind of guy - quiet, unobtrusive, and content to curl up at your feet. He does have a more playful side, though, especially when there are squeaky toys involved (his bouncy trot around the yard with a favorite toy is almost too cute!). He’s always happy to get outside, whether that’s for a walk around the block, a roll in the cool grass, or even a swim! Seven is looking for a home where he can enjoy plenty of peace and quiet, and cuddles with his people. If that sounds like your place, he would love to meet you!

DOGS: Has lived with another dog, has a mixed history with others

- Seven lived with another dog in his previous home. They generally got along well and he sometimes seemed to gain confidence from the other dog, especially when greeting new people.

- There were a few instances where Seven would growl at the other dog when she came too close to his food or a toy in his possession but never escalated beyond a warning snap.

- His previous owners reported that Seven seemed uneasy around other dogs, on or off leash, and would move away or correct those that approached too quickly, but may warn up to them with time.

- Here at HSCC, he has generally been unreactive toward other dogs in nearby spaces and has been relaxed on a walk with another (much larger) dog, but gave her a warning when she got too close.

- Overall, Seven doesn’t seem particularly interested in engaging with other dogs, but communicates very nicely with them.

- Seven doesn’t have any experience with cats or other small animals.

KIDS: Has lived with young children, but would prefer a home with older kids and adults

- In his previous home, Seven lived with a baby and a toddler. He would generally co-exist well with them, but would startle at sudden, loud noises or being jostled.

- There were 3 instances where Seven nipped at the child when being bumped into, hit, or surprised. In each instance, it was a single snap that made contact but did not break the skin. This is indicative of good bite inhibition (meaning, he has good control of his teeth and bite pressure, intentionally not causing injury).

- He’ll likely be most successful in a home with older kids and adults who can respect his boundaries and recognize when he’s uncomfortable.

Seven is a sensitive guy, who will likely be most comfortable in a relatively quiet home without a lot of noise or commotion.

- We recommend positive reinforcement-based training – teach Seven what you want him to do! We do not recommend e-collar or punishment-based training, as these methods often have long-term negative effects on dogs (physically as well as psychologically) and create behavioral problems.

- Seven was house trained in his previous home.

- Seven has not been crate trained.

- However, he may appreciate having a large crate with the door left open, or another safe space of his own in his new home.