Sally is a Chief Deputy State’s Attorney and Chittenden County’s designated animal cruelty prosecutor. She is an avid animal lover and advocate and has been blessed with the companionship of animals her entire life. In addition to serving on the board, she volunteers in the adoption center and assists with HSCC’s transport program. She and her husband live in South Burlington with their senior basset hound Eli who they adopted from HSCC in April 2018 as a “foster fail.” 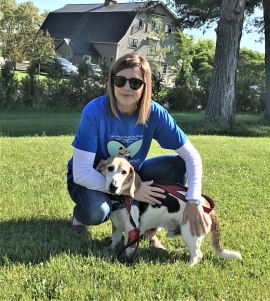 Tim Ashe joins the HSCC's Board of Directors fresh from completing his sixth and final term in the Vermont State Senate, where he served as its President. His government service spans the local, state, and national levels, having previously served as a Burlington City Councilor and a Congressional staffer. In Montpelier he championed nearly every piece of pro-animal legislation over the last decade. He’s proud that one of the final bills passed under his leadership banned the sale of ivory in Vermont. Professionally, Tim was an affordable housing developer for eight years at Cathedral Square, a tenure during which he created and rehabbed nearly 400 affordable apartments for older Vermonters. In recent years he's provided project management services to various non-profits. He and his partner Paula live in Burlington with their cat, Frankie. Frankie was abandoned twice, and returned by a would-be adopter who wrongly believed him to be a female cat, before commandeering Tim and Paula’s home. 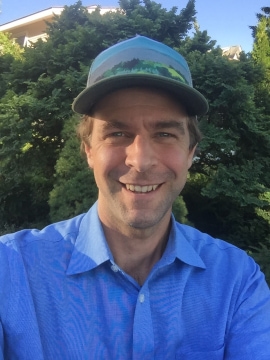 After retiring from a lengthy career with Liberty Mutual Group, it wasn’t long before Caroline figured out how she would be spending her newfound free time. Since she had spent a good part of her early life rescuing and caring for a variety of animals, it was time to return to helping them. It started with volunteering at a shelter in Maine, as well as fostering for New England Lab Rescue. It evolved to rescuing a puppy in Nicaragua, followed by Costa Rica where she has rescued, transported, and fostered many pups. Then came an involvement with howler monkeys by facilitating and participating in studies to help monkeys travel across roads, avoiding dangerous power lines. Her passion for Costa Rica led her to attend a Humane Journeys trip with Humane Society International in early 2020, followed by joining HSUS’s Vermont State Council. 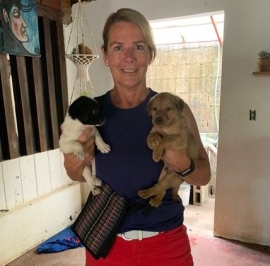 Jeanne works as an independent consultant in the areas of project management and human resources. She lives in Williston with her husband, two children and Luna, whom they rescued from HSCC in 2013. Always an animal lover, since childhood there has always been a dog in her life (mostly from shelters). She is thrilled to be able to support HSCC through her Board and volunteer activities. 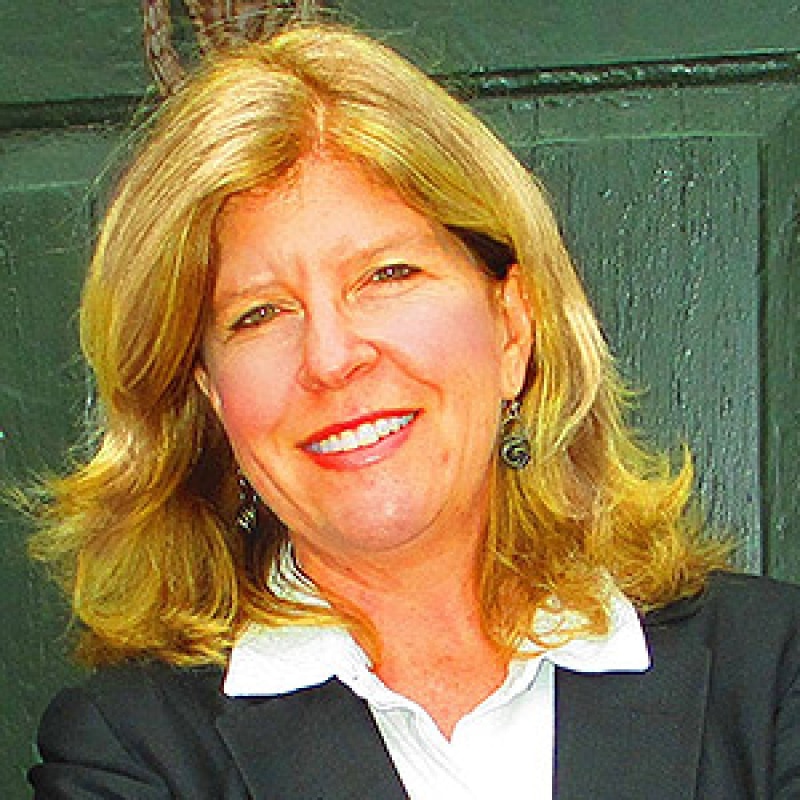 Barbara Cory is an attorney and passionate animal lover who has been on the Board and the Governance Committee for 4 years. She has also been on the Boards of the Child Care Center, Discovery Museum and The Visiting Nurse Association. She has two dogs, one a rescue and a cat from the Humane Society of Chittenden County. 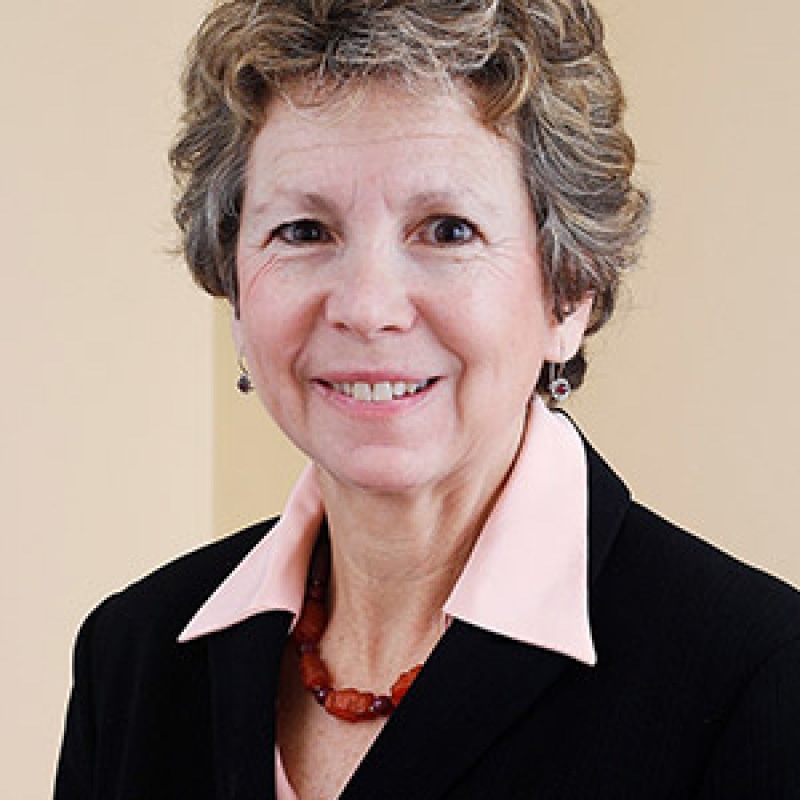 Annemarie is the VP of Real Estate Services and Principal Broker at Coldwell Banker Hickok & Boardman Realty. She is a graduate of the University of Maryland and brings many years of sales and project management experience to the Board. A longtime supporter, she is excited to connect her passion for housing with the mission of HSCC.

Annemarie is an animal lover and has adopted many dogs over the years, including Zoe, a lab mix that she “fostered” for HSCC in 2005 while Zoe recovered from surgery. She shares her South Burlington home with her Frenchie Daphne and her son Trevor when he is home from college. 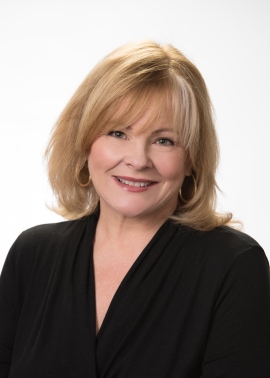 Whitney graduated from the University of New Hampshire with a BS in Animal Science and a minor in Business Administration. She is the hospital manager of Burlington Emergency & Veterinary Specialists, a 24/7 veterinary emergency and referral hospital located in Williston. Whitney joined the board in the fall of 2015 and is thrilled to be part of HSCC’s mission. She is an avid animal enthusiast and shares her home with two rescued yellow labs, Hobbs and Addison, and a HSCC alumni kitty named Chapman. 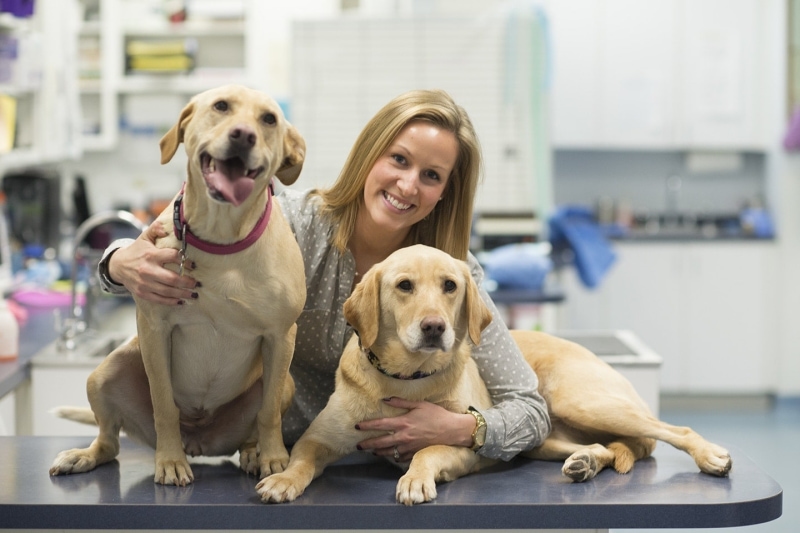 Robin has had a career in marketing working for companies in Vermont, including IBM, Bruegger's Bagels, April Cornell, and UVM. She is currently the Associate Vice President of Marketing for Middlebury College. She graduated from St. Lawrence University and has an MBA from UVM. She obtained her doctorate in education from Northeastern University in 2017. Her volunteer work at HSCC includes dog walking and morning cat care. She enthusiastically posts her walking companions on social media and shares their adoption stories. Robin lives in Shelburne with her husband Steve, son Chris, daughter Annie, one-eyed cat Jack, and recent addition of Ellie Mae, a Georgia transport dog from HSCC. 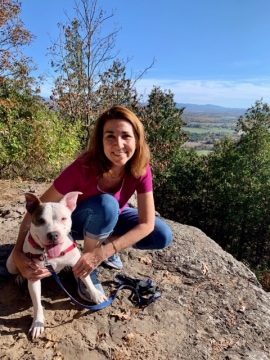 Nina Hurley is a graduate of St. Michael's College and currently works as a Senior Accountant for Beecher Carlson. A life-long animal lover, she began volunteering at the Humane Society of Chittenden County in 2013, and joined the board in the Spring of 2016. Nina lives in Burlington with her rescue dog, Eleanor. Yvonne is currently the VP of Centralized Operations at Planned Parenthood of Northern New England. She has over 20 years experience in operations across multiple industries. Her passion and love for animals led her to joining the HSCC Board in 2020 and she is thrilled to be able to use her skills for the betterment of animals and the organizations that serve them. She and her husband Dennis live in Colchester with their two rescue dogs Chase and Penny. 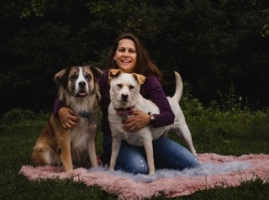 Kris Nelson’s love of animals goes back to his childhood when his parents instilled a love for all creatures great and small. In fact Kris has always felt that despite his place in life, he could always give time, energy and love to the care of animals. A professional in the food and beverage industry Kris, co-founded Citizen Cider in 2011, and hopes to bring his knowledge and love of food and beverage to the world of  HSCC (not a hard connection to make), by connecting his overly active social/business world with the this fantastic non-profit. 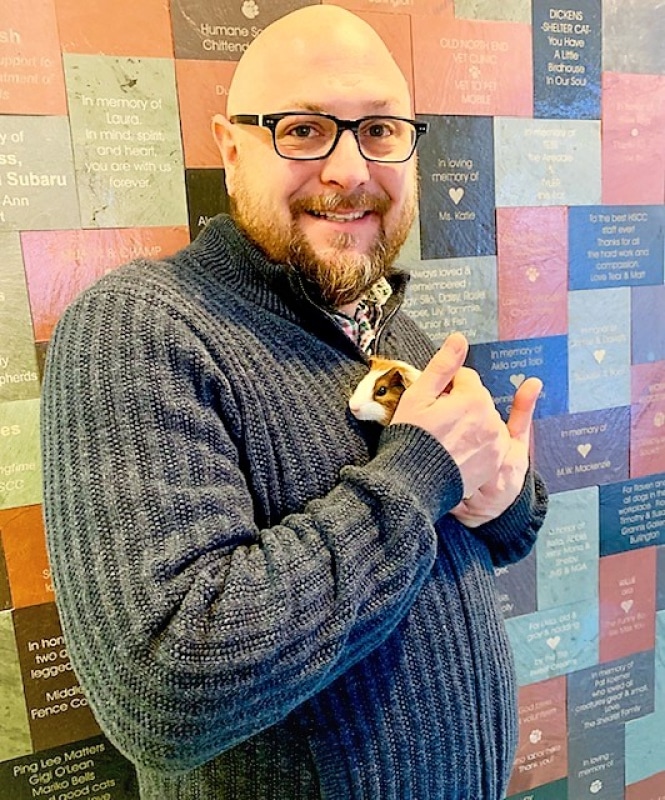 B.J. Rogers is the Vice President of Training & Organizational Development at Emancipet, an Austin, TX-based nonprofit on a mission to make high-quality spay/neuter and veterinary care affordable and accessible to all pet owners. B.J. oversees the Emancipet New School, offering public and private seminars, training, and consulting to animal welfare professionals and organizations across the country. B.J. is a Certified Animal Welfare Administrator, a Certified Dialogue Education Teacher, holds a Certificate in Public Leadership from the Harvard Kennedy School, and was HSCC’s executive director from 2005-2011. He and his wife Erin live in Colchester and serve at the pleasure of two corgis, Freddie Mae and Henry James. 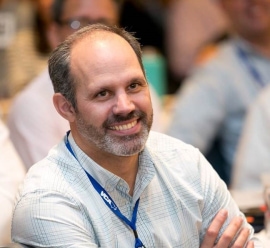 Sarah Schmidt currently serves as the SVP CFO at Champlain National Bank and has a strong background in Finance and Accounting.  She comes to us with a combined 13 years’ experience leading accounting departments for local manufacturing and retail businesses and nearly 10 years’ experience in leading the accounting department of Merchants Bank. She has also served as Treasurer for a local growing non-profit.

Sarah has been a resident of Hinesburg for over 18 years and lives there with her significant other and two amazing rescue cats, Noel & Gabby. She has made her home a loving one to many rescue cats and strays over the years, is a longtime supporter of the Humane Society and believes that every parent of a ‘feline child’ with behavior issues should spend time watching “My Cat From Hell” before considering relinquishing. 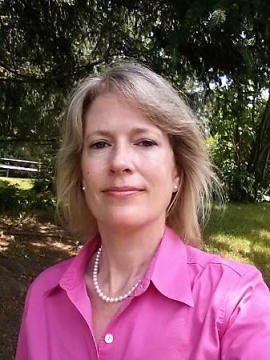 Sandy retired in 2020 after 25 years at Howard Center, serving most recently as Chief Medical Officer. She is Editor-in-Chief of the Community Mental Health Journal and is a member of the boards of directors of several mental health advocacy organizations. She is excited and honored to join HSCC, as the organization’s mission aligns with her own passions and values, which include protection of animals, support for people in caring for their beloved companions, and promotion of  therapeutic interaction between humans and animals. She lives in Charlotte with her husband and their two dogs, Patsy Klein and Shanah Ruth, and is a proud grandmother to her daughters’ dogs, Alma and Benji (an HSCC alum). 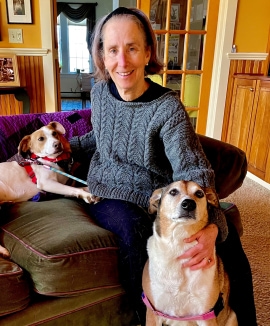 Christi Wojewoda is a pathologist at the University of Vermont Medical Center where she runs the Clinical Microbiology Laboratory. After a year of COVID-19 stress, she wanted to donate her time to a wonderful cause and was lucky enough to find HSCC. She has had pets her whole life - mainly dogs, but also cats, hermit crabs, and fish. Christi and her husband Kendall moved to Vermont in 2012 and live in Essex with their 2 rescued Weimaraners, Cosmo and Smuckers. 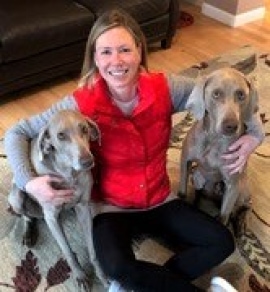